Imperial Valley is the southern most county in Southern California. The county borders San Diego County, Arizona, and Mexico. The valley is mostly desert, but it is irrigated by diversions from the Colorado River and it is also has a history of agricultural.

The population is roughly 200,000. The county seat is the city of El Centro. The region is a blend of cultures straddling the Mexican-American border. The town of Mexicali lies across the border with a metropolis of a million people.

Agriculture and government are the major economic generators, but tourism is second. The area hosts numerous off road vehicular parks. Including the Heber Dunes State Vehicular Recreation Area.

You may think you have never heard of the Imperial Valley or the sand dunes, but you would be wrong. 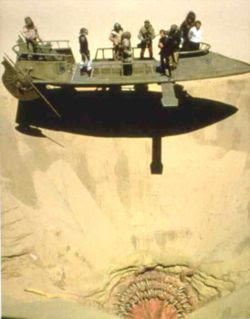 You see, a long time ago in a galaxy far, far away...the Jedi Returned here to save Han Solo from Jabba the Hut.
Posted by Neal Hitch at 7:49 PM 1 comment:

Well, after five months the day is here. I have just booked a flight and I will be leaving for a new adventure next Tuesday. I have been hired as the Executive Director of the the Imperial Valley Desert Museum. The museum constructed a new building in 2007 but never opened. I will be developing exhibits, programs, and staff and will be opening the museum in the next year.

FINALLY SOMETHING TO BLOG ABOUT!
Posted by Neal Hitch at 6:51 PM No comments: