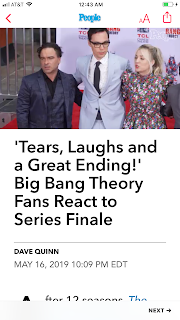 It never raised its voice. It laughed. But not too loud. It argued. But never yelled. It was consistent. With a volume level that allowed one to fall asleep to its consistent idiosyncratic banter. All the while it continued to play throughout the night.

During the four months I was in Alaska in 2016, I watched the Big Bang Theory every night. I would put a DVD in my computer and watch four episodes until I drifted off. I watched 10 seasons. Three times. Then I watched every episode of every season in reverse order. Season 3, where both Bernadette and Amy are introduced is clearly the best season, so I watched it again, and then again.

During the final season, which ended tonight, I moved to Hawaii and lived in an apartment for a year without television. I have not seen a single episode of the final season. Season 12. Maybe this is for the best. I can leave this part of my past behind. 12 years from leaving Ohio. 12 years of Big Bang Theory.

Or maybe it is part of a larger plan, where I binge watch the Big Bang Theory until the final season is released and then...I watch that over and over and over again...

until I fall asleep.

Only to wake up in the new reality of a new sitcom.