Ocotillo, Whats in a Name 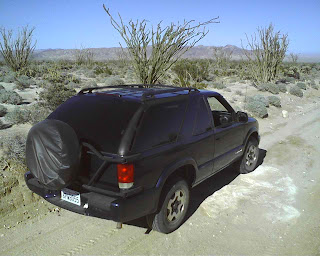 I spent yesterday afternoon in the desert driving around. The desert is no joke. It is very unforgiving, just like the ocean. I need to be a little more respectful and not so flippant. I was driving along some real sandy road and all of a sudden the road ended and I was just in the middle of the desert. Not only is it illegal to not be on a clearly marked road, but I found it to be really uncomfortable. I had to get out of the car and see if I could find the road. Eventually I turned the car around and was able to backtrack where I had come from, but this was not as easy as you would think because for a while I was evidently on really hard pack and was not leaving tracks.

One of the interesting things is that there are 55 gallon drums marked AGUA spaced along roads and railroad tracks. Inside there are boxes with gallon containers of drinking water. This is for people who have come across the border and are trying to walk through the desert. But there are lots of stories about people who get their cars stuck as well.

On another note, the ocotillos have started to bloom. The ocotillo is a tall stringy cactus. They are usually all brown and dead looking. Like most of them were a few weeks ago when I got here. But we had a couple days of rain and two weeks of cooler temperatures and everything changed. They are now covered with small green leaves and have red flowers at the top. The desert above Ocotillo, the town, is covered with them.

People keep saying that we will have a desert bloom soon. This evidently is really cool. Well, hopefully we will see.
Posted by Neal Hitch at 3:47 PM 1 comment:

When I was at The Ohio State University working on my second graduate degree I remember talking about a book that, at the time, was all the rage. I think it was entitled "When Jesus Came the Corn Mothers Went Away." I know I talked about it. But I also know I never read it. I always loved the title, though. The book was about the inability of the Spanish to accept or understand the customs and difference of the indigenous people they encountered in the Southwest. The collision of two very different world views altered and changed both. 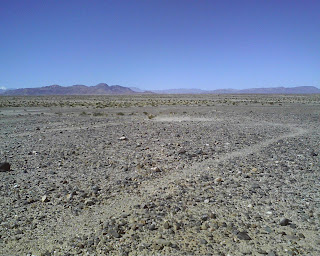 Today, I spent all morning in the desert looking at geoglyphs with couple native Americans. The geoplyphs can be interpreted as creation stories. Discussions centered around the fact that Hokam is the oldest language spoken in the US. The people are the oldest. "They were created here, born here, never left here."

"Yea, but where did they originally come from?" said I.

"Across the Bering Strait?"

"Up from South America?" said I.

"What, like God came to the desert and created them?" I replied in my Western Civilization perspective of the world.

I have read creation myth stories. I have advocated their voice in museum exhibits. I have gone to the sites at Black Hand Gorge. I have even seen The Whale Rider.

But I still carry the baggage of 6000 years of Western tradition.
Posted by Neal Hitch at 5:18 PM No comments: 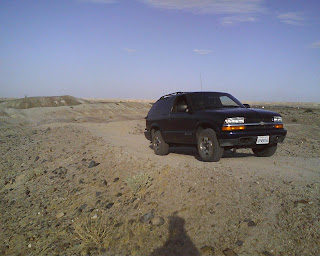 This week I finally received the 4-wheel drive that was donated to the Museum. I have been running out into the desert to test it. It feels very good to finally get out. Everyone keeps trying to tell me how to drive in order not to get stuck in the sand. Please...a foot of desert sand is a piece of cake compared to two inches of Ohio snow.

It is different than I thought it would be. The desert is very bumpy. A bigger fear than getting stuck is breaking an axle. The first day I drove with my new friend Jimmy he told me that when he was driving professionally he would drive 100 miles per hour in the desert. I decided that was my new goal. But then last week at 40 I almost bit it, so I have had to reset my goal. Its all about suspension. Now my goal is to get a dune racer. 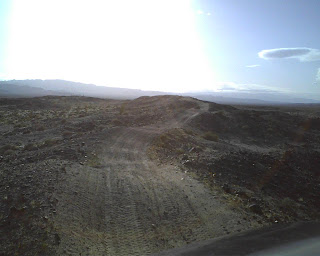 Posted by Neal Hitch at 9:11 PM No comments:

Eight weeks ago I decided to get younger. I re-bought weights that I had left on Grand Turk. I started walking everyday around the museum grounds. I bought and began to take the regimen of vitamins that I was taking on Grand Turk.

OK, just so you know. My new goal here is to free climb the distances and types of terrain that I dove on in the Turks and Caicos. It is part of my current "opposite" theory of life experience. This is not going so well.

Now the back story...

In September, right after we had returned from the Turks and Caicos Islands, I helped roof Arron's house. My left knee became inflamed from going up and down the ladder caring bundles of shingles. Six months later, it is just getting back to normal. In January, I slipped on the ice and fell directly on my right kneecap. My knee has been sore for two months, but I decided to exercise the pain away.

Exactly five weeks ago I turned my walk at the museum into a run. Then that night I did yoga. I sat down on the couch and my knee was swollen up the size of an orange. I got on the intenet and some sports medicine website said it would take two weeks for the swelling to go down. And, that there were over 5000 yoga related injuries reported in 2009. For a week I wore a knee brace and tried not to move too much.

The next week the swelling went down and I started building shelves at the museum again. Then, on the second day a furniture dolly I was using to move shelves flipped up and hit me directly on the kneecap. My knee swelled up to the size of a grapefruit (OK maybe a small grapefruit).

That was three weeks ago. I was getting concerned, but finally in the last couple of days the swelling is down and I finally have mobility again. But after five weeks of not being mobile, I am having to start all over at getting younger.

You know you are getting old when someone gives you their arthritis medicine to help your "sports" injury.
Posted by Neal Hitch at 8:00 AM No comments:

Well, this has really been a busy couple of weeks and I will try and catch up. I finally decided that I would just blog about stuff as if it just happened, rather than letting things go or trying to keep stuff in chronological order. Since I am mostly by myself no one will know anyway. But then, if I always say that this happened "today" it will seem like I am never working. 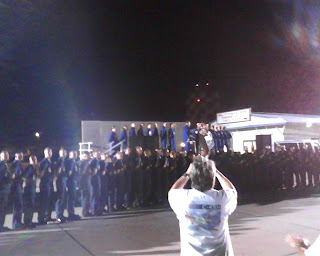 Two weekends ago was the public introduction of the Navy's Blue Angels 2011 demonstration team. Their winter training base is here at the Nav Fac facility in Seely. There was a food and music fest at the base on Friday night and an airshow on Saturday. I went to both. 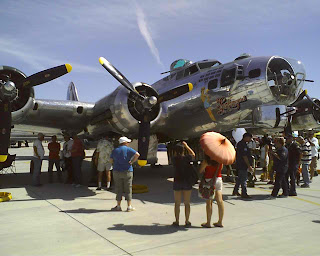 Saturday's airshow marked the kickoff of the Blue Angles' season. This was their first public performance as a team. The air show went all day. Mostly typical stuff. But I love seeing the WWII vintage aircraft and paid to walk though a Boeing B-17 bomber so it was a good day for me. 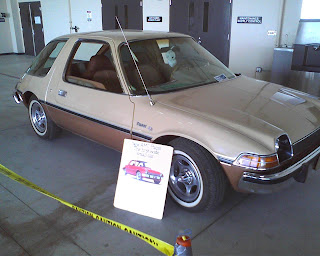 Some organization was holding a car show in one of the hangers. One of the cars was an AMC Pacer. Deneen drove a car exactly like this in High School, until her brother totalled it.

You know you are getting old when you feel nostalgia about something that someone else is preserving as history.
Posted by Neal Hitch at 11:54 AM No comments:

Alright, a small step forward. We got internet set up at the museum today. Well, kind a, sort of.

The museum purchased a Verizon airnet card so that we have wireless interent throughout the museum with limited usage of 3 gigabytes a month. But it is far better than the drive into town to use the internet at Starbucks.

So one down. Still don't have a car or a place to live. But at least I'll be able to whine about that more often.
Posted by Neal Hitch at 2:31 PM No comments:

Meet and Greet, and Eat 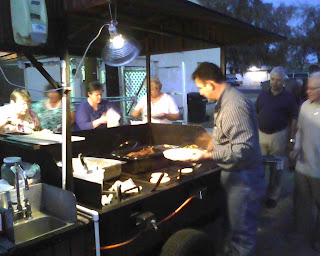 Tonight was the new director Meet and Greet in El Centro. The event was catered El Rey del Taco. Seriously, a cart with a frame grill cooking asada, pollo, and chillies and making tacos. How cool is that. I wanted to go back and get about a half dozen more tacos but I kept it in check even without Deneen there.

They asked me to get up and say a few words. At which I said, "I really have nothing prepared."

45 minutes later I said, "I hope that wasn't too long, sorry you just learned something very important about me."

A guy on the front row said, "That was just long enough."

So I got that going for me.

Seriously, El Rey del Taco. How cool is that.
Posted by Neal Hitch at 9:41 PM 1 comment:

The Navy is at Steak 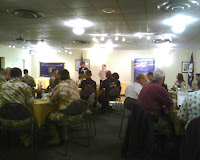 Last night I was invited to the Navy League monthly steak dinner at the El Centro Nav Fac base. This is a Navy air base a few miles east of the museum. It is the winter home of the Navy's Blue Angels. Met the Master Chief who oversees all maintenance of the flightline of F-18s.

I took a picture of the steak. I should have included a person in the photo for scale. I think that every meal I have had here so far has been wrapped in a tortilla. So steak was welcomed. 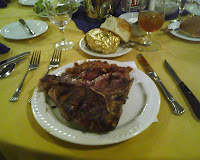 This was about as big a steak as I have ever had. I had it removed from the grill less than medium rare, cut it, and gave it a bath of A1. There were only three of us at our table so I went all BDH on the potato with about half of the sour cream in the bowl.


They gave out a bunch of awards and there was a speaker, but I was really into the steak. Eating nothing but beans, I have lost five pounds in three weeks. But not tonight.
Posted by Neal Hitch at 8:22 PM 6 comments: