Earthquakes and other natural disasters

The USGS website lists eleven significant earthquakes around the globe in the last 30 days. We had the top two of them today. The first was a 5.3 two miles north of Brawley at 12:31. We were sitting in the house after church. Deneen thought it was a train. But it just kept shaking and shaking. Then at 1:52 there was a 5.5 about three miles north of Brawley while we were standing in line at Starbucks. That one shook the whole store. We stood at the counter watching the cups shake back and fourth. You could feel the earth shake both ways, first one direction then the next. Everyone just sat there; business as usual.

Deneen thought she felt a couple more during the day. Tonight Lucas and I were just at Walmart. He pointed out that all the signs hanging from the ceiling were swinging back and forth.

Evidently, the fault here was very active today. I just looked at the USGS real time earthquake chart for Southern California. There were over 100 earthquakes listed in Brawley beginning around 7:30am. Most you don't feel. But a 5.5 is pretty big.

Earlier this evening I had to take a hot tub out to the new intern residence at the museum. On my way out of the parking lot I noticed a stream of water by the road that should not have been there. There was a broken water pipe at the storage facility shooting water into the air. I put a quick fix to it and and did not think much, except I could not figure out why the line had broke. It was like a shear break. It was weird. Now it makes since. Tomorrow I am going to have to write up an Environmental Incident report to record damage caused by an earthquake.
Posted by Neal Hitch at 12:06 AM No comments:

Karate Board Breaking at Museum 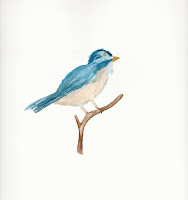 It has been an extremely busy summer. I have not been keeping up with the blog. I came out a year and a half ago to open the Imperial Valley Desert Museum. The museum opened in March and this was our first full summer of programming. We received a summer grant for healthy activities, so Lucas has been teaching karate, and we received a grant for an artist-in-residence. Martin has been here all summer investigating desert sized art and running the youth coiled-clay art program.

This past weekend was the end of our summer programming and we held a watercolor painting workshop. Saturday was also the karate board breaking ceremony. So it was a big, full day. Our whole family participated in the painting class. The painting instructor was really good. Even Deneen liked it. She painted this bird, which I thought turned out great.

There was an article and video in the paper today. Click here to see Davis going on and on about the painting class. The video looks like it was just us, but the other people who came did not give photo release permission.

Posted by Neal Hitch at 8:27 PM No comments: