This year we spent Thanksgiving at the Ocotillo Optimist dinner in Ocotillo. The optimist prepared dinner for 50. Far, far fewer came. So we left with a weeks worth of leftovers.
On Saturday we took the leftovers and hiked to the wind caves with the Imperial Valley Hiking Club. I prefer to call them the "eat and nap" hiking club. And you may remember a couple previous posts. 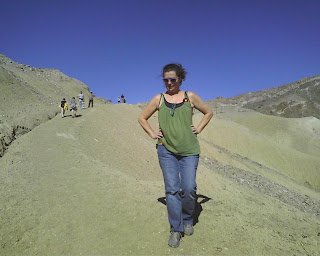 Today's hike was four miles. Two miles in. Lunch. Two miles out. Sorry, in order to get back before dark the nap had to be left behind. Which is actually kind of a bummer.
The wind caves are very cool. They are a large stretch of mountains where, for the last million years, the wind has been shaping and rounding the rock. This area is on the back side of the Coyote Mountains, where we hike often, but we had never been here. One of the outstanding features is that from the back side of the mountain you could see clear to the Salton Sea, about 60 miles away. 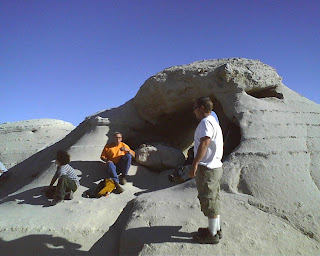 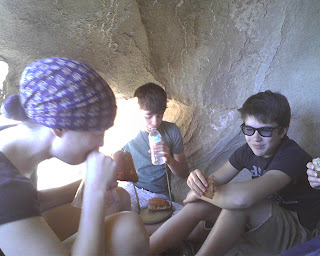 Posted by Neal Hitch at 4:46 PM No comments:

For the three years on Grand Turk we spent Thanksgiving with either the Bonnie and John or Bion and Colleen on Grand Turk. Dinner was set with the backdrop of crystal blue waters and spectacular sunsets.
On Sunday, I spent the day with Bonnie and John in Annapolis, after spending the weekend at a conference. I have forgotten how much I liked hanging out with them. We always appreciated the times on Grand Turk. Their vacations there were also sort of vacations for us, especially for Deneen, who always missed her friends from Columbus.
We had a great afternoon watching Shelby play Lacross. But for me the highlight was walking through the historic waterfront of Annapolis. I have also forgotten how much I like early American urban architecture.
By the time I fly back to San Diego and drive back to El Centro it will be time to think about Thanksgiving. But this visit is already making me miss Thanksgiving, well at least the last couple of years.
Posted by Neal Hitch at 4:35 PM No comments:

Hiking is the New Deneen 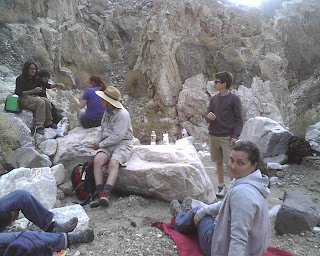 It has cooled down in the Valley and I guess much like when I first came, it must be hiking season again. The past two weekends we have been hiking out in the desert.
We went out with the "lunch and nap" hiking club a couple Sundays ago. Then this past weekend we went hiking over on the east side of the county to look at archaeological sites.
I keep telling the boys that their mother is ruining there chance at a happy marriage. Because though she asks where the beach is a lot, and she complains about being hot a lot...by the time they boys have wives and children they are not going to remember any of that. They are just going to say things like: "My mom could hike twice this far," and "My mom climbed mountains twice this high." 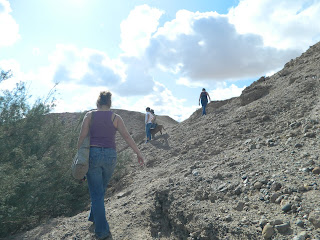 Posted by Neal Hitch at 5:23 PM No comments: 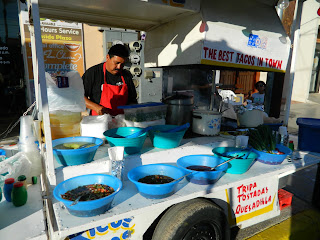 Well, I have a lot of catching up to do. The weekends have been busy, lately. This past weekend we took our first trip into Mexico at the Algodones Port of Entry. We walked around for a minute, but spent most of the time eating.

Rico's Tacos is a taco stand, or really a taco cart, sitting along Avenue A, right around the corner from Calle Segunda, within the first blocks after you cross the border into Algodones, Mexico.

Look closley at the picture. He is a fixture at this location. There is always a line, which includes both day visitors and locals. Now, I will admit, his tacos look good.

“Are they really the best?” I inquired.

A lady standing near the cart turned. “Yes!” she said. “We have eaten tacos all over town, these are the best.”

“I never turn my nose down at authentic Mexican food,” said my traveling companion. I guess we will try them and see.

“Tres,” I said, trying to remember my best Spanish from high school, even though it was not really necessary.

In a few seconds, I was holding a small styrofoam tray of tacos. Along the front of the cart there is a wide array of toppings including grilled hot peppers, guacamole, cucumbers, and salsa lined up from hot to mild. I topped each taco a little differently.

Rico has been selling tacos off of his taco cart in Algodones for 20 years. He grills carne asada over coals right on his cart from 11:00am until the border closes at 10:00pm.

There is another guy who is the “money man.” You pay him. “I never take the money,” says Rico.

I asked the “money man” how much I owed. I don't know what I expected, but I did not expect it to be $3.00. The tacos were big, well worth the value.

A third guy came over and asked if we wanted something to drink, well specifically if we wanted a bottled Coca Cola. In Mexico, Coke is made with real sugar. It tastes like coke used to taste in the US twenty years ago. For another dollar we bought a Coke.

We just stood in front of the stand and ate. Now, I have eaten a lot of tacos. I happen to really like tacos from taco stands. But my experience is with taco stands in Ohio. Rico's tacos were good. Really good.

We finished them quickly, and started to leave. “Excuse me,” said the drink guy. “My bottle.”

I did not understand.

“My bottle,” he said again, handing me a plastic “top go” cup.

“Oh, you keep the deposit,” I said. We guzzled the rest of the Coke and gave him the bottle.

We continued our walk around looking at the stalls and venders each saying, “It's almost free!”

“Those tacos were almost free,” I joked to my companion. “They were really good, too”

We made a circle around the block and found ourselves back at Rico's Tacos.

Are Rico's Tacos the best in town. Well, I did not try every taco in town, but I will tell you a secret. The next day, went back across the border just to go to Rico's taco cart for lunch.

Posted by Neal Hitch at 5:05 PM No comments: