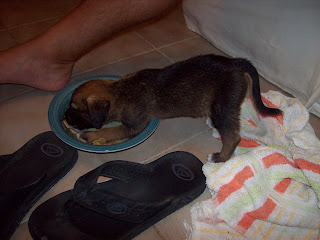 Doesn't that sound like a great title to a children's book. Last Christmas, we, evidently from the memories that my children keep of the event, had an episode. When we went to pick up Davis up from a party at Tuvol's house, he announced that he had won a puppy and tried to get in the car with a tiny dog. Really? Is there anyone who would be cool with this? Thats what you think you need on a three week “vacation” is to dump a puppy on your estranged father.

Deneen sent me a text reminding me of this story today. This, after someone sent her an IM on Facebook to ask what she thought of the new puppy, after having read about said “new puppy” on Jessica's blog (read the last blog entry).

Three nights ago I was sitting in the house when after about three hours I said to myself, “That dog has been barking for a long time.”

I went outside with a flashlight and found a tiny little puppy stuck in the cattle grate of our housing compound. I was able to rescue the puppy and get it out of the pit. I brought it into the house and got it to eat.

Next to swimming, saving puppies has been the most consistent thing I have done here. Actually, this started with the first week I was on Grand Turk. You can read this in the third blog I wrote, September 11, 2007, entitled “Saving Puppies.” That is when I met Elaine.
Posted by Neal Hitch at 8:10 PM