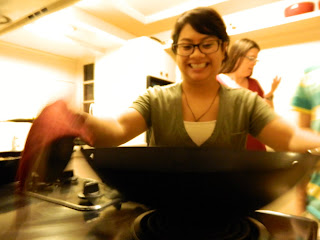 This holiday season, eating has been a constant theme.

The two BLM interns who have been working at the museum left at the end of December, but before they left they wanted to come over to the house and make a traditional Korean dinner. Staff cooking dinner at our house was one of the traditions started on Grand Turk everytime an intern left.

Natalie cooked a dinner of spring rolls, BBQ pork, and stir fried rice. It was delicious, and we had a house full. 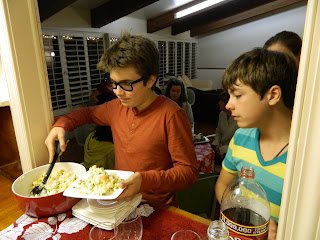 Having someone over to the house to cook became a good impetuous to get pots and pans. We still have been cooking with the one 5-quart chili pot that I bought in June. Right before Christmas turned out to be a good time, we found an opened box of Martha Stewart cookware that was missing pieces. It was 50% off and we got another 25% off because of a Friday late night sale. Cooking went off without a hitch, literally.
Posted by Neal Hitch at 12:28 AM