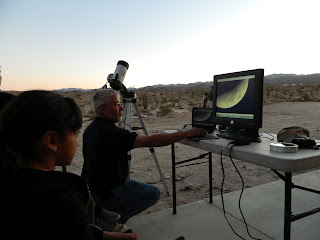 This week marks exactly twelve months that I have been at the Imperial Valley Desert Museum. During most of that time I have been the only employee and have been writing plans to open the museum. On Saturday, we held our first public event, a "Star Gazing in the Desert" event. We had four amateur astronomers come out to the museum to set up telescopes. Saturday was a dark sky night, and it is really dark in the parking lot of the museum. When we planned the event a couple months ago, we set a goal of having 20 people show up.

I started to get nervous on Wednesday when Davis brought a flyer home from school that a friend gave to him. The friend had no association with the museum, and he did not know that Davis was connected to the museum. He just said it looked like a cool event and thought Davis would want to go. A local business who was sponsoring the event put out an email and told me they had 8 people had responded the next day saying their families would be there.

I met with staff and told them we should rethink what we were going to do. We replanned for 50 people. On Friday we set up the building. On Saturday morning I bought more drinks and refreshments.

At 3:45 two students came from the local community college. They said that their environmental science teacher told them to come. If they took a picture at the event they would get extra credit in the class. Then people kept coming, and coming, and coming. At 5:30 we had 78 people in the building. The final attendance count was 135.

There is an anticipation of the museum opening that is peculating just under the radar here. I said a year ago that I thought we had a twelve month window to do something, before the momentum would fade. This week we are going to have to rethink our plan and strategy. Things are going to start moving really fast.
Posted by Neal Hitch at 3:23 PM