Why Too Busy to Blog? 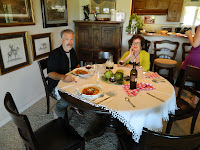 My brother Bryan has been complaining that I never blog anymore. I kind of blew this off, then I see that I have one blog in the month of February, one in April, and one so far in May. He did not take any of my excuses.

What excuses? Life is crazy. All I do is work. Lately, work is mostly writing.

This last week I had an interview with a lady in Brawley who immigrated from Italy in the 1950s to avoid an arranged marriage. I knew that the article was to be about Italian cooking and I had suggested that the photographer take pictures of the lady cooking. I thought the interview would take an hour. When we got there it became clear that this was a lunch meeting, and it was an Italian lunch meeting. We had pasta Siciliana. As Bryan will remember, I knew this was going to be a pork dish because of a dinner we once had in Culver City. But unlike that day, which is a story only the best of friends, and four family members, will know, this was the best Italian food I have had in California. Three hours later I had heard story after story and had eaten two plates of pasta. It took two more days to edit my notes into 1000 words.

I use to say that on Grand Turk you had nothing but time. Whatever you wanted to become, you could become on Grand Turk. Because there was nothing to do, you could devote your time to learning something. And this actually became what you did for fun. I knew people there who were working on contract who became fluent in Spanish. Or who moved from working a cruise ship excursion to being the leading marine biologist in reef reclamation.

I had all these plans. I was going to finish two books. I was going to learn French, Italian, and Spanish. What I did was cook and blog. But then, as I return to the states something amazing happened. I can cook really well. And I can write.

I did not see this coming, but all the writing I did on Grand Turk for free, has turned into a second job in the Imperial Valley. Within the first few months of being here I was hired at the Imperial Valley Press to write advertorial copy. I sent the editor there a link to articles I had written for the Turks and Caicos Weekly News and a link to my blog. The next thing I knew I am getting writing assignments to travel around and write about cool stuff you can do in Southern California. That blossomed into writing for the Winter Shopper magazine, the Valley Women Magazine, and Abundant Opportunities, the magazine of the Imperial Valley Economic Development Corporation. All the time I use to spend in the evenings blogging, I now write travel articles. Or in the case of Valley Women, stories about women.

Most people I run into now, here in the Valley, know me from the Valley Women's magazine. I basically interview women and write their stories. Typically, I set up interviews at Starbucks, talk to someone for an hour, then write their story and email it to an editor. I have never seen the magazine. The other day, Deneen made fun of me by telling me she had read one of my articles - at the  hair salon. I asked if it was the one on wedding planning, she said no, it was the one about wearing a condom (in all fairness, that was an important story on the county director for AIDS awareness).