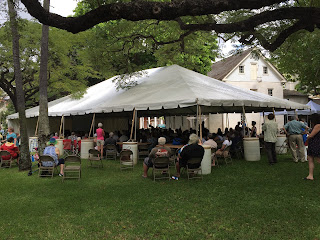 Yesterday was the first day of the bicentennial of the Hawaiian Mission Houses. It was a celebration of the life and passing of Henry Opukahaia, the first Hawaiian to convert to Christianity. He had a goal of bringing the Christian message back to Hawaii, and worked within the movement of the Second Great Awakening to see this happen. His untimely death, on February 17, 1818, meant that he was never to see Hawaii again, but the published memoirs of his life was a best seller in America and had a similar effect as Uncle Tom's Cabin in calling Northern Protestants to action.

In my own life and history, it seemed I had very little connection to the eventual mission that came to Hawaii. But through the celebrations surrounding the life of Opukahaia, I find that is not necessarily the case.

Along with Samuel Mills, Edwin Dwight, James Richards, and Adoniram Judson, Obukahaia was in a society of young men committed to beginning foreign missions. All of them were attending Andover Theological Seminary. Mills was one of the founders of the American Board of Commissioners for Foreign Missions, which sent the first missionaries to Hawaii. Judson became the first missionary to Burma. Judson is also considered the first Baptist missionary.

I am a long way away, in what is turning out to be a very small world.
Posted by Neal Hitch at 4:40 PM