Baby you're a firework 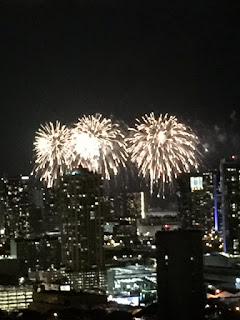 Last night, I was invited to a dinner party on the 32nd floor of the Pinnacle. That is probably unimportant. Though, unbeknownst to me, it was also the night of the 24th annual Honolulu Festival that ended with a very large display of fireworks. It was very cool.

Tonight, I updated my new Instagram account and reviewed the posts from this last year. I also did our taxes yesterday.

When I look at Instagram, I am amazed at both how fast 2017 went and what the year entailed. Deneen and I were traveling nearly once a month throughout the entire year. Martin and Kelsy hiked the Pacific Crest Trail. Lucas and I built two large inhabitable art projects. Davis spent three months in Yellowstone National Park.

When I review it, the year looks nuts.

On December 11, 2016, I returned from Dutch Harbor, Alaska. We were in Columbus in March. Martin and Kelsy came to the Imperial Valley for Coachellain April, then the next week we put them on the Pacific Crest Trail. Deneen and I flew to Chicago in May for Lucas's graduation. I was in St. Louis the following week for AASLH. And that week we put Davis on a train to Yellowstone. At the end of June Lucas and I went to Budapest. Then at the end of July we were in Columbus, again, where both Deneen and I celebrated our birthdays. The last weekend of August I interviewed at the historic site of Woodstock - Jared drove 11 hours to meet me and we saw Sting (a highlight of the year). In September we accepted th eLagacy Award at Judson, in Chicago, and then I went to Austin for the AAM conference. In October, back to Columbus again. In November, Deneen and I interviewed in Hawaii - the weekend after Thanksgiving. Lucas left for Japan. Martina  and Kelsey came for Christmas. And then I moved to Hawaii!

The year has been nuts!