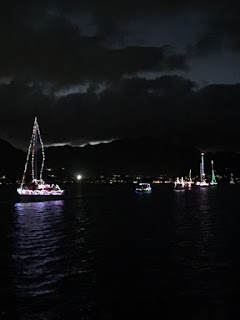 Christmas 2018 was spent in Hawaii.

The lead up to Christmas in Hawaii was full of events and celebrations. At the Hawaiian Mission Houses the season begins with Honolulu's oldest craft fair, which we host the Saturday after Thanksgiving. The first reference to the craft fair was in 1844 as a "Fancy Fair" offering local made crafts to whalers. The annual City Lights Parade party was next, which we hosted on December 1. The Honolulu Marathon was the next weekend. Then we had a large Candle Light Tour at the Mission Houses, followed by the Parade of Lights in Kaneohe Bay, followed by a staff Christmas party at Kualoa Ranch, followed by Christmas hiking, followed by Christmas. 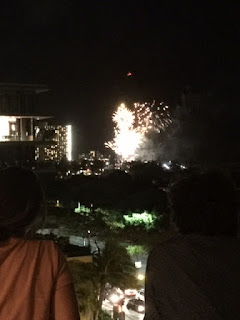 All three boys plus their wives or girlfriends were here the week after Christmas through the New Year. With just the one Jeep and eight of us in the apartment, a lot of our time was spent at the Ala Moana beach or other places we could walk. It is weird, but I do not have a single picture in my phone from that week. Maybe, a defense mechanism. What I wish I had was a picture of all the shoes at the door. Maybe then you could empathize.

We spent New Years Eve in a destination where 75,000 people come to spend New Years Eve. But, we can see that from our apartment. So it is both good and bad, because...we were so close to this huge, monster party in Waikiki that it didn't make any sense to go. The boys went down, Deneen and I partied at home on our lanai.

And that, as they say, is how we started our second year in Hawaii.