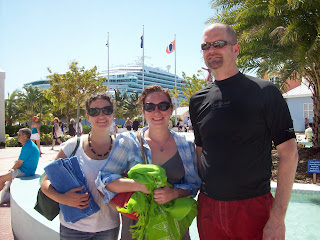 Dave came to Grand Turk to visit this week. And Patricia came in to visit Jessica on the same plane.

They were suppose to come in on the late plane, but they were able to catch the afternoon plane into Grand Turk. By the time I got Dave's message, we were running late. Jessica was concerned that her friend was going to be waiting at the airport having no idea what was going on. I tried to reassure her that if Dave had gotten my message he would be with her at it would be no problem.

Now, having never actually met Patricia, my description of her to Dave was somewhat general. He, evidently only had to inquire four times to young women on his plane, "Are you Patricia?"

Though this may have been a little creepy, it was effective and she managed to get here with him with no concerns.

Right from the airport I dropped them at the cruise center so that Dave could get a sunburn on the top of his head. This is always my plan for people who visit. If you get into the water immediately on your arrival the whole miserable process of traveling here is forgotten.
Posted by Neal Hitch at 5:48 AM