Chillin in the Pool 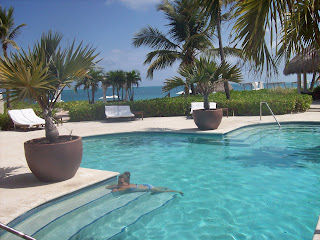 We are back on GT and at the museum today. But we are still thinking about our weekend on Provo. Nice pool.

The Grace Bay Club is supposed to be one of the nicest hotels on Provo. Guest services was wonderful when we checked in. The room was very nice with a large complimentary fruit plate and champagne already set up in your room.

The restaurant has an infinity bar which is advertised all over as being one of the coolest places to hang out on the island.We had a great weekend, spent mostly in the room.

I have tried to stay at a variety of resorts on Provo in order get an idea of facilities and to meet people. I had thought that a series of small teaser exhibits might work well at these facilities and that there could be some kind of program between the hotels and a new museum on Provo. My conclusion, however, is that this proves to be more difficult than I had originally thought and that the systems of management and personnel do not lend themselves to outside partnerships.

I have developed conclusions about the hotels here, though. Nikki Beach was the best hotel, it had the nicest staff, the best pool, and best restaurant on the island. We are very sorry that it is closed. I also preferred the Veranda as far as the room and amenities. The beach bar at Seven Stars is the nicest small bar on Provo. The best stretch of beach on Grace Bay is probably right outside the Royal West Indies.

So goes our stays at the various resorts on Provo. I don't know if we will ever be back. We had this conversation at the museum today. But if a friend hooks us up with rooms at the Veranda again, I think I would be back in a heartbeat!
Posted by Neal Hitch at 5:51 PM