The Iron Duke and the Harold 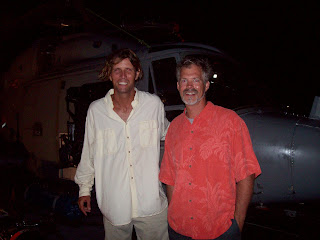 Justin and I kayaked out and snorkeled on the Harold today. This is his last week on the island. He is heading back to the states.

The Harold is the shipwreck we can see from our beach. We took Ben and Caroline's kayak and left from their house. It took about 20 minutes to reach the edge of the reef where the wreck is. The ocean looked like glass and the first half of the trip was fine. When we moved past the lee of the island, however, the wind picked up and it was surprisingly rough.

The Harold sits on top of the reef in about 4 to 6 feet of water. The bow of the ship is clearly visible where it jambed into the reef. This is the large piece we see sticking out of the water. Evidently the ship folded in half during the wreck, or thereafter. The stern is in front of the bow and has a single propeller of about 6 fix in length. The reef is littered with debris from the ship breaking apart.

I told you that when I talked about snorkeling here people told me they always see sharks. This was no lie. Twice a large nurse shark came from behind and swam underneath me while I was snorkeling. They come fast and silently. I had no idea it was even in the area until I saw it swimming away. They look magnificent swimming effortlessly through the water. It was super cool. Justin saw two additional nurse sharks and a reef shark.

We swam the reef from 2:30 to 4:45. I found another wreck somewhat in front of the Harold. This wreck included two propeller shafts attached to diesel engines. It appears to have been a wooden hulled vessel, because all that is left is the engines, shafts, propellers, and a bunch of tie pins.

When we came up out of the water the wind had picked up and the waves started getting strong again. We paddled in safely with no problems, but it was getting freaky. The Harold was a fantastic site, but the conditions change too quickly.

Tonight I attended a reception on the Iron Duke, a type 23 frigate that is docked at the cruise port. I took Justin as my guest. It was very nice and well attended. I spoke to Mr. Lewis (high school principal) and told him you were excited about returning to school.
Posted by Neal Hitch at 8:18 PM