Where Is Simon, Sandy? 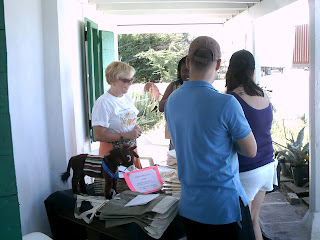 We got back to Grand Turk on Thursday morning. On Saturday I flew over to Provo for an author signing for Where is Simon, Sandy?, a children's book written by Donna Seim. The book is based on a Grand Turk folk tale.

The signing, at Unicorn Book Store, went better than I had expected. People came in consistently throughout the morning. The author signed over a hundred books that were sold. This is a project that the museum has been working on for two years. We thought that the events surrounding the book would have to be postponed because of the hurricane. Though things came together just at the last minute. They went better than planned and the weekend turned out to be very successful.

These books are available through Amazon.com and through the publisher at www.PublishingWorks.com

While in Provo, I bought lots of frozen meat, as well as a turkey and fruit and vegetables for Thanksgiving. I was 37 pounds over the weight limit in getting back home. This would have been a problem, but a first, the girl at the counter just letter it slide. The bag was too heavy though, and I had to take out the turkey and bring it over as a carry on.
Posted by Neal Hitch at 12:17 PM