Have you seen Saturn Lately 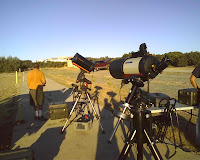 Sunday night we went up the grade to the San Diego Astronomy Associations property in Boulevard. The association has an isolated piece of property where amateur astronomers bring large and expensive telescopes to view stars in a very dark, mountain setting.
We went up at about 6:00. About 10:00 it got dark. 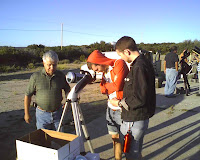 For years I have looked at the night sky seeking a satellite. Some guy came over to where we were standing.
"In about a minute the Hubble Telescope is going to come by," he said.
And there it was. A small, steady light moving west to east at about 15 degrees above the horizon.
"Its going to shimmer and then disappear as it moves into the Earth's shadow."
Then it was gone. A minute later a second satellite moved across the heavens going north to south.
"That is a military satellite. They are the only ones moving north to south," the young man continued.
"It was quite alright when it was high but now its very low. Da, da, da," said I.
A while later the telescopes were set and warmed up. 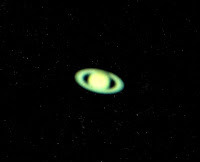 Saturn has been high in the night sky within ½º of the 3rd magnitude star Gamma Virginis all month. I have never seen anything like this before. It looked fake. It was so clear it looked like a sticker someone had put on the lens.
We also went into the super large, super cool telescope that the association opens occasionally for visitors. We looked at M51, a whirlpool galaxy about 24 million light years away from the Milky Way. About a month ago, a super nova showed up in this galaxy. It was a small dot of light visible in the lower center of the vortex.
With the exception that we were totally dressed inappropriately, because it was freezing, this was very cool stuff.