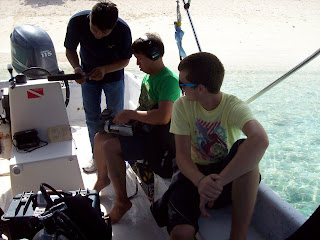 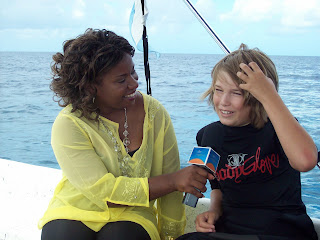 Today is my birthday. This has been a long 42nd year. How do you spend a birthday after a year such as this?

Today Martin,Lucas, and I dove with a film crew from a television show called Turquoise Morning. This is a picture of the film crew and Lucas wiping the hair out of his eyes while being interviewed on national television.

This dive was my 50th dive on Grand Turk. We dove with Roger Hartling, who is finishing a dive guide to Grand Turk. The highlight of the dive was a 5 foot eagle ray that swam along the wall below our entire line of divers. It was very cool.

The interviews went great. Martin is very good on his feet. Lucas will probably be edited out. I had to instruct him after the dive that we have standard phrases he needs to memorize when talking about diving on Grand Turk.

When asked about sharks you say, "The only time you see a shark is when they don't see you first, sharks tend to stay away from people."

When asked what you would do if you saw a shark you say, "One of the first rules about diving is don't touch anything, so my advice is don't try and touch it."

This is the new dinner conversation, talking points about being on camera.

After the dive I took the film crew through the museum and then down historic Duke Street. We wrapped on the beach in front of the SandBar at 2:30. I jumped in the truck and raced back to the museum where I had to do a cruise ship tour because it is Saturday and I have no staff to work the cruise ship which came in at 1:00.

OK, that's all done. We went to the cruise center to swim this evening.

Right now I just pulled a rum cake out of the oven. I am cooling a vanilla espresso cake, and I have two layers of chocolate Toblerone chip cake baking. Happy birthday.
Posted by Neal Hitch at 1:21 PM

Nice try on the wrong answer in your blog.

Every year you spend in the Caribbean you are allowed to take a year off your age. I can't believe you didn't know that.