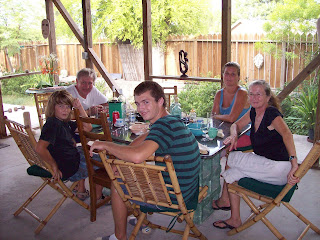 Today we all took a boat trip out to the wall. Mart, Luke, and I went diving. Deneen and Davis snorkeled around.

We came out of the water at 1:45, just in time to get to Alessio and Jackie's house for lunch/dinner. The dinner of grilled sausages was great. The conversation lively. Cuban music resounded thoughout the house.

Dinner lasted for about four hours. The last hour or so Alessio got out the rum and cigars that he brought back from their trip to Cuba several weeks ago. Then we talked politics very loudly. For anyone who has had dinner with Alessio and Jackie you know what I'm talking about. 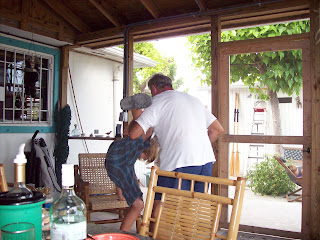 Like happens at many dinner parties, after the rum and Cubans Lucas got into a fight. Now, I must say that for the most part Alessio was having all the rum and Cubans, and it was not really a fight fight. Though it did end with Lucas (or really the rum I have to add) knocking Alessio over and into the table, where as the serving plate of sausages fell onto the tile floor and broke into several pieces, and where as Alessio cut both his arm and leg on the tiled side table.

Then the fight started. Not only is a nice serving dish impossible to replace on Grand Turk. This was also a special plate given to Jackie before they came to the island several years ago. I could not stop laughing, and I ate another sausage off the floor.

On our way home we discussed how many parties were going to end with Lucas beating someone up and breaking something. This makes three that I have been to. Though I don't think you would guess it, it just seems to happpen.
Posted by Neal Hitch at 7:04 PM