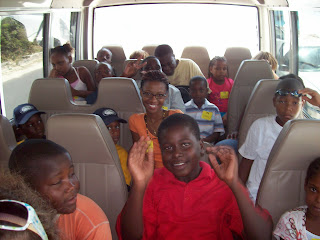 Today was our weekly Children's Club outing. We loaded onto a bus and were off for an ECO ADVENTURE.

Now when I say we loaded onto a bus, I mean that 32 of us got on a twenty passenger bus. The tour was fantastic. We visited several natural history sites with one of the best tour drivers on the island.

The highlight for sure was our visit to North Wells. This is one of the oldest heritage areas on the island. The north wells were created by Bermudians in the seventeenth century as fresh water wells so that the horses and donkeys left on the island would not die.

Today, the area attracts a variety of wildlife, because it is one of the few areas in the bush where water is found.

The minute we got out of the bus kids started chattering about a dog in the well. The story is one you have heard over and over and over. Who is going to climb into the well to rescue the trapped puppy? 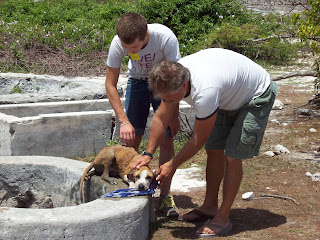 After we had loaded everyone back on the bus, I climbed into the shallow well and Martin and I pulled the dog out of the water. It appears that the dog had been in the water for a few days with nothing but its head above water. It came out easy enough, but had difficulty walking. The bus driver had a leftover lunch on the bus, which the dog ate enthusiastically.

We went back later to make sure the dog had recovered and moved on home. It had.
Posted by Neal Hitch at 6:56 PM