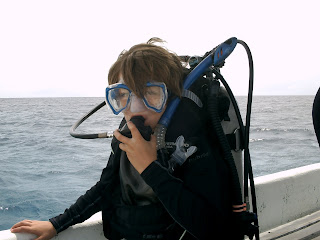 In the morning, Davis completed his third and fourth open water dives for his PADI scuba certification. We had two dives with Mitch from Blue Water Divers. Short and quick, there is too much to do today. 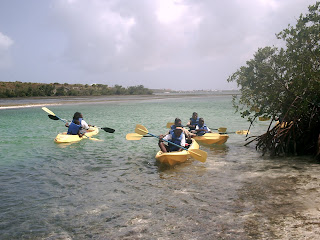 I have always heard that the tidal current in North Creek is very strong. This is what makes it dangerous (if you remember the post from a few weeks ago). In fact the current is very strong and tide was coming in. Paddling the hardest you could got you nowhere. Kayaks were spread all over the creek, which looks more like a large lake.

After an hour of vigorous paddling, everyone was able to beach their kayaks onto a dredged jetty that extends into the creek. There is a large dredge barge with a huge crane rusting where it stopped working in mid project years ago at the end of this jetty, but that's a story I have not heard yet. Everyone walked down the jetty back to kayak shack. Only Reuben was able to get his kayak back to the dock. This left 15 kayaks to be carried back portage trail style.

When we finally got back to the museum an hour and fifteen minutes late it was time for the program to be over. But we stayed to have our snack of Poop Deck chicken.

Unlike every other day we have a program everyone sat eating their snack in total silence. Everyone was totally exhausted.
Posted by Neal Hitch at 7:36 AM