I am at the National Historic Preservation Conference in Nashville, Tennessee.

I have missed a couple blogs from our trip to Chicago. Maybe I will get to them next week. Maybe not.

The conference in Nashville has been very cool. Though the conference is about preservation issues, the organizing committee has organized bands at every turn. Last night Dave Berg played before the keynote address at the Ryman theater, the original home of the Grand Old Oprey. He is a songwriter who wrote, among other things, "These Are My People" and "I've Had My Moments," both number one hits. Then late last night, I went to the "world famous" club called Tootsies and listened to bands until way too early this morning. Not really my gig, but Deneen would have loved it. Today at lunch a band called Rollo Greb played in the lobby. These guys are two brothers one who is finishing a Ph.D. at Middle State University.
http://www.myspace.com/rollogrebmusic 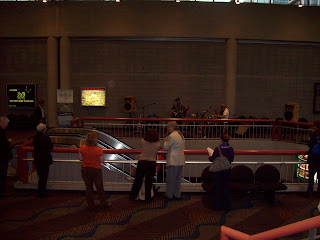 They were great. please check them out.

Anyway, much like the last conference I attended in Austin, Nashville has turned out to be pretty cool for the music.


But...I am a little put off. I know I have been out of the country for two years and I know I have not published anything dealing with historic preservation in two years, but I have not run into a single person who knows who I am. That is so depressing I can not even begin to tell you how depressing it is.

That at least was until today. And although it was only one person. I will take it. Tonight I attended the Candlelight Home Tour. This was fantastic. We toured ten homes in the Edgefield neighborhood. I can't believe how much art cool people have in their houses. But that's another story.

Finally at 122 South 12th Street, "The Ambrose House," Jeff, the homeowner, read my name tag and said, "I hear their is a thriving preservation community in Columbus."

"I don't know, my experience is that if you really believe that preservation is important they drive you out of town," said I.

That started a lengthy conversation, but at the end Jeff said, "I have read your work on urbanism and preservation."

"Really?" I said, "Because if that's true I am going to blog about it."

Hurray...I can feel good about myself again.
Posted by Neal Hitch at 9:17 PM

I'm surprised no one came up to you and said, "Hey! You're the eight-foot porch guy!"