Dinah Has Left the Building 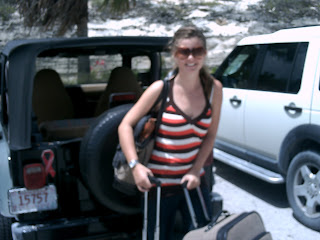 Dinah left the TCI today. In fact, I just watched her plane fly over as I was standing at the Department of Culture. She has been on Grand Turk for seven months with no break. That is as long as Deneen and the boys were here before the hurricane.

Dinah has been running hurricane relief programs. After the hurricane, the museum received several small grants to run relief programs. The After School Homework Program and and the Community Mural program became our two most successful programs. Dinah ran the after school program every day from 3:00 to 5:00 for college and high school students. We had a total of 67 students come through the program. This is about 24% of the target student population on Grand Turk. 59% of the students returned to the program regularly. Our goal was to have three students a day in the program. We had over 300 visits during the six months the program ran. But we used 200 report covers and over 5000 sheets of paper.

Dinah also started and ran a new cruise ship tour that was picked up by Princess Cruise Lines. This week we were going to come to Provo all week and eat at good restaurants and relax. But we got a call that Carnival has picked up the tour. On Dinah's last day on Grand Turk she had to give three tours of the museum. That was yesterday.

What happens now? I don't know. We will just have to see.
Posted by Neal Hitch at 3:27 PM