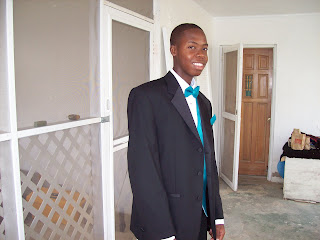 In a world without Ike, Martin would be graduating high school this week.

This is a picture of our neighbor Denzel. He is graduating from H.J. Robinson High School. He was awarded two subject awards coming in third in his class in Visual Arts and third in Social Studies. On Wednesday we went to the Ona Glinton Primary graduation. I went to support my friend Tuvol who graduated from the sixth grade. Denzel's sister was also in his class. She was fourth in the country for her grades and end of year testing. Her mother, our neighbor and the vice principle at Ona Glinton, was dancing down the isles of the auditorium. Deneen and I talked about how different celebration is here then in our reserved Puritan society in Ohio. I don't think there was a graduation ceremony anywhere in Ohio where the vice principle was dancing.

The Harrisons also left this weekend. They bought a house near ours and they have become good friends. They have been on Grand Turk since Deneen arrived and she has been hanging out with them for the last two weeks.

This weekend was the fishing tournament as well. Sixteen boats signed up for the weekend. On Thursday night the boats were auctioned off. $22,000 was raised for the tournament pot.

This week has been filled with all kinds of things to do, but we just stayed home building a timber portico for a patio/garden I am working on on the east side of our house.
Posted by Neal Hitch at 10:14 AM