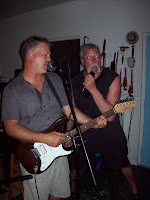 Anyway, it was amazing. Wally was a crazy good harmonica player. But he was even better on a 13th century wooden flute. Now, I know what you are saying. Wooden flute. Reggae music. Didn't everything sound like "Land Down Under" by Men at Work?

Yes! Exactly! It was about as cool as hearing an entire two hour concert of Land Down Under by Men at Work. Except with me singing instead of Colin Hay.

Seriously though, it was really incredible. One of the best nights I have had playing on Grand Turk. All thanks to a first person historic music interpreter. How "museum" is that!
Posted by Neal Hitch at 11:29 AM