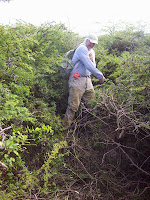 For the last three days I have been working on the survey of GT4. This if the fourth Lucayan site to be found on Grand Turk. The museum has wanted to do work here for a long time, but it was never a priority and has never been funded. Well, now the area is going to developed, so it s priority.

It is funny that in Ohio I always wished I could work on archaeological projects but could never break into ranks of the elites who controlled the Ohio Archaeological Council. However, here I am one of the few people with a great deal of archaeological experience. A few months ago we received a proposal for completing archaeology on a site that is extremely significant. The price seemed unreasonable, so I countered with an offer to provide two volunteer staff who would serve in place of two archaeologists in the proposal. The savings of $10,000.00 was enough that it made the project feasible.

OK, that sounds great. How excited I must have been. But now after three days of digging 53 holes I am beginning to re-think the wisdom of my folly. I am so tired and sore. One of my issues is that I can dig a really good hole. This should fall to Rory, who has the youth to dig holes. Unfortunately, I dig a much, much better hole. So I dig holes. I can also swing a machette. Evidently an acquired skill working at the conference center.

But I have to say, doing pre-historic archaeology is really boring. Shells, really? Tiny bead fragments, really? Don't even get me started on fish bones.

Today, we hit an area that is called the Corktree Plantation. Ah, finally, blue transferware, pearlware, even cut nails. The real stuff of human occupation.

Well, anyway, I still would rather be digging privies or really cool foundations. This is real history, isn't it?
Posted by Neal Hitch at 4:32 PM