Rory has Left the Building 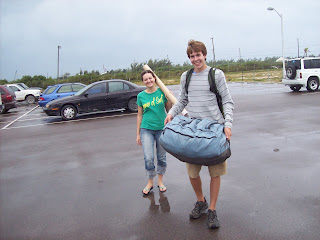 Rory left yesterday. I am almost as sad as when my boys left. Rory has been a great intern, and a great worker at the museum. But more than that I have enjoyed living with him.

Though it makes me mad when anyone kills me in Medal of Honor, at least there was someone here to play with, and Rory wanted to play nearly every night. I think I defeated him twice in the last eight weeks.

I will also give him credit for finding the new reef we swim on constantly now. He never tired of snorkeling. In fact he was trying to get Jess and I to go midnight snorkeling during the full moon his last night here. I thought better of this. All I could think about was we made it eight weeks with no accident, wouldn't it be ironic is on Rory's last day he was eaten by a Great White on a midnight snorkel. Did I say that we watched Jaws two days ago.

Anyway, Rory will be on Pine Cay for a week with his family; a good vacation at the end of his two month vacation. And then he will be back to the snow. Good Luck.
Posted by Neal Hitch at 7:09 PM