Dave and Joel have Left the Building 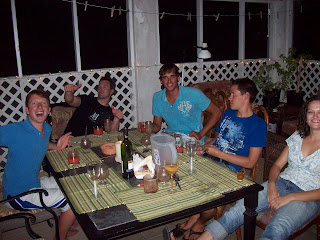 Dave and Joel flew out on Sunday. While I worked this week they completed their dive certs with Blue Water Divers. On Friday I joined them for an early morning dive and then a night dive. The morning dive with Dan was great. Among many other things, we saw a Lemon Shark out on the reef.

On Friday night we dove off of Library with Jesse. The moon was nearly full. This dive was very cool. My first night dive. We dove with a flashlight down to about 55 feet. Diving at night is kind of surreal.

On Saturday we all snorkeled out to the Harold. This is a shipwreck on the Northwest reef that is only accessible about twelve days a year. Saturday was one of the few days. We were just going to snorkel north of the house. But as we went out, it became clear that we could make it to the Harold. This is one of the coolest sites on Grand Turk. Almost as cool as the Harold is a second shipwreck just to the south. In this area you always see sharks. Yes, in fact a small reef shark.

This was a swim of more that two and a half hours. It was also one of the best snorkel days I have ever had on Grand Turk. We all saw a spotted Eagle ray eating and not paying any attention to us. I finally saw a spotted sea snake. We saw a spotted moray eel. Then, we all saw one of the biggest sting rays I have ever seen here. Later, we were on the reef looking for lion fish. We found a nurse shark. By five o clock my feet were bloody from too much swimming in fins.

Saturday night we had Dan and Daniel over for dinner. This was Dave and Joel's last night here. We had lion fish sushi and dog snapper that we bought at the fish market.

The week has gone very fast. We had eight cruise ships in and I have had to deal with a major issue concerning the new National Health Insurance Plan. I wish I could have spent more time with Dave and Joel, but in the end they were on a dive boat almost six hours a day. So their week was good by all report.

They were able to meet a few people a little younger than me. And we had a few great dinners. So all and all, I think they had a good time. And the distraction for me was not working a 70 hour week. So I enjoyed it too.
Posted by Neal Hitch at 5:24 PM

Neal! We had a blast... maybe too much of a blast! I miss your cooking, swimming for hours each day till my heels are bleeding from the fins, and getting burnt everyday, haha. This was by far the best vacation I have ever been on and I am glad that we were able to stay with you and become good friends.