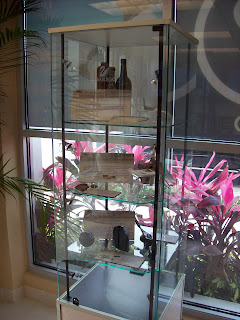 Well, yesterday we finally installed the panels on the Salinas Kiosk at the Town Pond on Grand Turk. And today, I flew to Provo and installed the Island Wise exhibit case. The Salinas Kiosk has been a project we have been working on since before the hurricane. It has taken forever...but that is a whole other story about the frustrations of working in the Caribbean that only a few people can ever really know.

The Island Wise case is part of a plan I have been working on to get museum exhibits in places around Provo in order to raise awareness of the museum and the types of collections we have. Though the case is small, with just a few archaeological artifacts, it very nice. Limited, but tasteful.

This is all in anticipation of fund raising for the new Provo facility, which begins on March 20th. The first press release for this event also came out this week. A lot of what we have been working on here is finally coming together. Just with a year-long interruption called Ike!