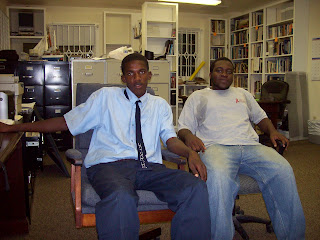 Dinah was here seven months running an after school homework program that was part of a grant funded program for hurricane relief. Look what has she left me with!

School started last week. Everyday we have had a troop of kids stop by the museum. Everyday I have to tell them that we do not have an after school homework program.

"Why does Kenlove get to come in?" they said.

I am trying to remember what Bryan and I were called at camp that was meant to be derogatory...the "favorites." I don't ever remember thinking I was a favorite of anyone, except maybe mom. I always just thought I had talents that made me more interesting than the other kids. Does that sound mean?

When I leave here, one of the things that I will take, I will remember, and I will miss are the relationships with my young friends who are drawn to the museum. Kenlove and Rueben have been coming almost everyday this summer. I finally gave Rueben a job and told him that if he was going to be here he might as well be productive. Kenlove is a different story.

When I first came to the museum Kenlove was hanging around. Kenlove has a way of... well lets just say he talks fast and loud and peaks English as a second language with an incredibly strong island accent. People would ask me why I kept letting him come in. I would say, "Why does he want to come in?"

One day, I picked up a notebook he was working in only to discover Kenlove's other world. It was filled with poetry. Well crafted poetry that is very visually constructed. Now, I have a program where Kenlove has to write one poem a day. Next month in the Astrolabe we are publishing an article and a few of his poems.

Before I went to the states a couple weeks ago, Kenlove came to see me. "I need some things for school."

His list was everything you would need to go to school from shoes to pencils. Tuval came to see me and told me to bring him back an Iphone. I have seen both the best and worst of handouts and dogooders here after the hurricane. But in my world there is a difference between a humble request for what you actually need; who's your neighbor.

When I gave Kenlove his supplies Tuval was beside himself. But Kenlove has been writing poems everyday. Stinky kids.
Posted by Neal Hitch at 1:19 PM